Warping Long - Lessons in Winding On

A couple months ago I auctioned off my warping services to a member of the local Weavers' Guild as part of their biennial (every other year?) fundraiser. I have done a lot of warping but most of it has been for workshops, which means short and narrow warps. Of course, the weaver who bought my services wanted 12 1/2 yards put on her table loom for dishtowels. 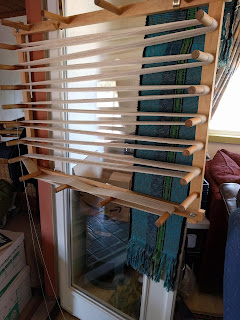 I broke out the warping board and wound away. I was careful not to bunch up the warp as I was winding so that the ends would all be the same length. I snagged a large roll of paper from work and figured it would be long enough. I got about halfway through winding the warp onto the back beam when I ran out of paper. I considered putting it all away until I could get more paper but I was jazzed to get the project finished, so I cut up some paper sacks and used them with about a full turn of the warp beam in between each sheet.

It worked ... however, when I got to the end, I had angled warp ends rather than straight across. I know I wound my warp correctly, besides, the longest ends were on the end I started with (the opposite is true if you pile up your warp while winding - each layer of yarn adds a little more length to your warp and with a long warp, that difference is noticeable). I think my paper was too short on the one edge and the warp slipped out on that side. To fix it, I'll need to pull all the warp out, replace the paper, and rewind. If I don't and just cut the ends straight, the tension will be off (by the same amount that the warp was angled) when it's woven. 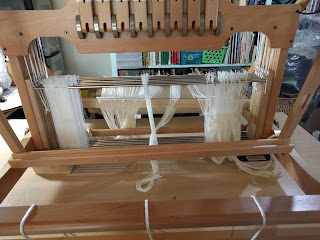 I didn't want to go out and get more paper so I went ahead and started threading. The draft I was provided was emailed to me as a photo of a photocopy of an old (80s) Handwoven project. After about 10 threads, I got tired of opening up my phone to look at the draft and decided to write it out on paper... Pro tip, when you copy out a draft make super extra sure that you don't make a mistake! When I got almost to the end of the 400 threads, I realized that I had misplaced the repeat bracket, missing two threads in each of the five repeats ... No way did I want to re-thread the whole thing! I tied on some string heddles and I'll add the missing threads back in when I pull the warp out and re wind it.

I bought a roll of rosin paper from the hardware store to use for the warp (it's cheap, tough, and works great). This weekend I'll get that project finished and move on to the next.

I learned a lot from all my little mistakes. Don't get lazy about your paper width, it's not worth it! Now I have a huge supply of paper the right width for my loom so I don't have to worry about that problem for a while. If I'm going to copy a draft by hand, really double / triple check the repeats! Warping 8/2 cotton for a dishtowel isn't any harder than other types of yarn. I had heard stories about the yarn catching and pilling during the warping process, creating huge tangles and problems. I didn't encounter any problems that were worse than other sticky yarns... fine wool is way more of a pain to wind on.