We had a lace weaving workshop at the shop last weekend. The students didn't finish weaving off all of the looms we had set up. I have always wanted to try out weaving leno so I jumped at the chance to make a sample. I made this sample with 16/2 linen and it is really nice and crisp. 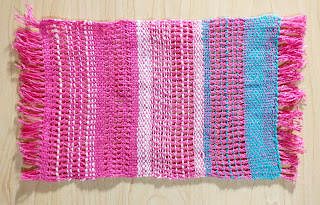 Leno refers to the twisting of the warp threads around the weft as you weave (rather than just up and down as in "normal" weaving). Bead leno uses beads (cut up pieces of plastic straw works great) to connect the paired warp threads together rather than string doups like in doup leno. I set the loom up for this sample but it still feels like magic - not sure how it works. 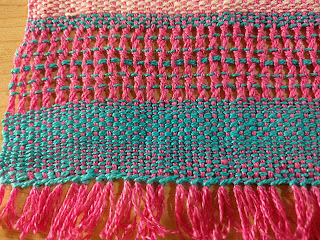 The first section (bottom) was half-basket and full basket plain weave. Next I tried the plain leno: you can see the pink warp twisting around the teal weft. This was a really open weave where my beat was limited by the twisted warp. The shed was very narrow, but I found that I could clear the shed by running my fingers along the beads or, even better, raise the non-participating shaft - this seemed to really clear the beads so that I had a clear (but still small) shed. 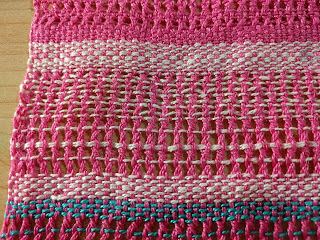 After another bout of basketweave and regular leno I tried mixing it up with who knows what it is... I'll call it half-leno - it's only half a twist per weft pick which allows the weft to be closer, and the feel is softer. I really liked how it felt but it wasn't as striking as the regular leno. I think the technique would have looked more interesting with a stripped warp so that you can see the twisting better. 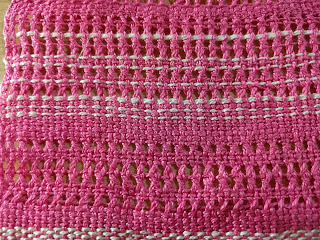 The rest of the sample I played around with mixing leno twist with woven picks in the middle rather than a single (or doubled) weft thread.

All in all, I really liked this technique and I'm looking forward to using it in a real project. I have plans for a leno tencel scarf from ... a 90s Handwoven with the dog on the cover ... don't remember the real issue number! I also want to use it to make a blanket with my large handspun as the weft.